Since the availability of the Chromecast in 2013, and the public release of its SDK in 2014, only few information was published about the protocol used by this device: Google Cast. This article is the first of a series that will explain the technical aspects of this protocol. So let's dive into the wonderful and dark world of Google Cast.

As we will see during all these articles, google-cast is both a very well designed product from the technical side and a completely locked technology. Google wants to keep this technology as closed as possible so that only receivers blessed by Google can be implemented. This is probably because they consider google-cast as one of the most promising ways to get control of the TV screen. All the security features used in google-cast are probably one of the reasons why there are so few information available about it on the internet. One should consider these articles as an attempt to document google-cast.

Since the application is distributed between two devices, both parts must communicate together. The following figure shows the high level design of this communication: 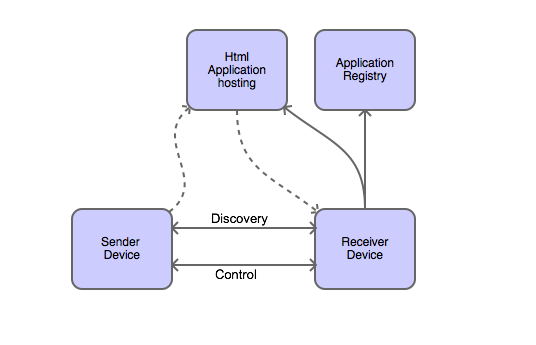 To do all these communications between the devices and the applications, many protocols are used. The following figure is a more detailed view of the whole stack: 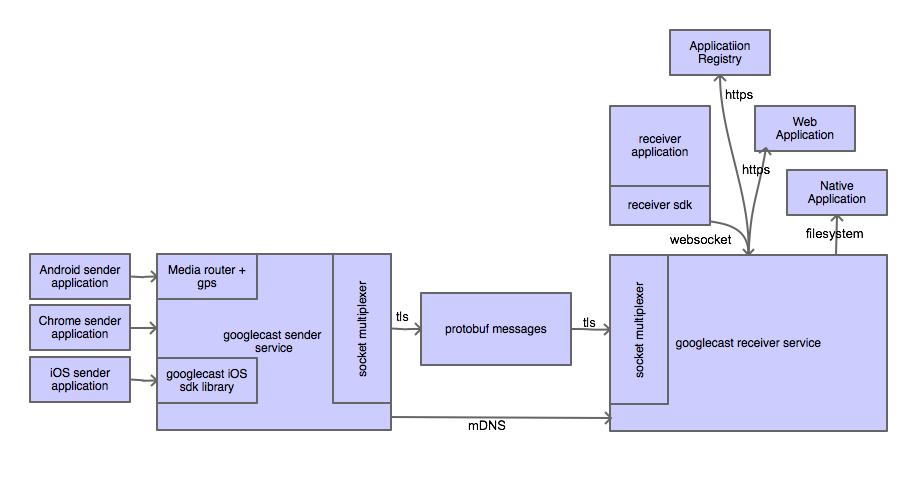 The sender device contains a google-cast sender service. As of today, there are 3 implementations of it, on the 3 supported hosts: Android, iOS, and Chrome. On Android this service is implemented in google play services, partially on top of the media router framework. On iOS this is implemented in a library embedded in the sender application. On Chrome, it is part of Chrome’s code. The sender service is responsible for:

As seen before, many protocols are used for the whole protocol stack. Most of them are standards, others are proprietary. here is a summary of the different protocols used:

The usage of each of these protocols will be detailed later. But this already shows some complexity that is typical to \"modern\" communication frameworks : A heavy use of existing standards with some proprietary add-ons, all cooperating to implement a higher level service. AllJoyn - an IoT communication bus - is very similar in its design.

This is all for today. This introduction article should already provide a good overview of how the google-cast protocol works. I will continue with each step of communication between the sender and the receiver device.Go to the next article to see how discovery is done.